When the Catholic missionaries arrived in the Americas, it was common practice to demolish indigenous temples (now considered archaeological sites protected by various forms of legislation) and reuse the building materials to construct a church in the same location.  Some of the most poignant visuals of the Talaban’s propaganda machine in action in 2001 was the dramatic destruction of gigantic statues of Buddha (although this New York times article providing the Taliban’s side of the story is quite fascinating, as is this NBC article about the plan to reconstruct them).  Museums have been targets for looting and desecration in both the 2002 Iraq war and recent uprisings like Egypt’s Arab Spring, indicating the power of the Past and what the heritage preserved in museums represents to the public.  In yet another example of the destruction of heritage fuelled by contemporary agendas, we are now hearing about ISIS’s destruction of heritage sites in what has been dubbed “the cradle of civilization’.  Quirks and Quarks host Bob McDonald has written about this in his blog this week and offers an excellent overview of this issue, and reminds us of the power of the past and the need to control it to shape the narratives of the present. 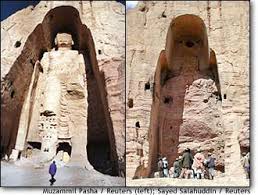 The Bamiyan Budda, before and after